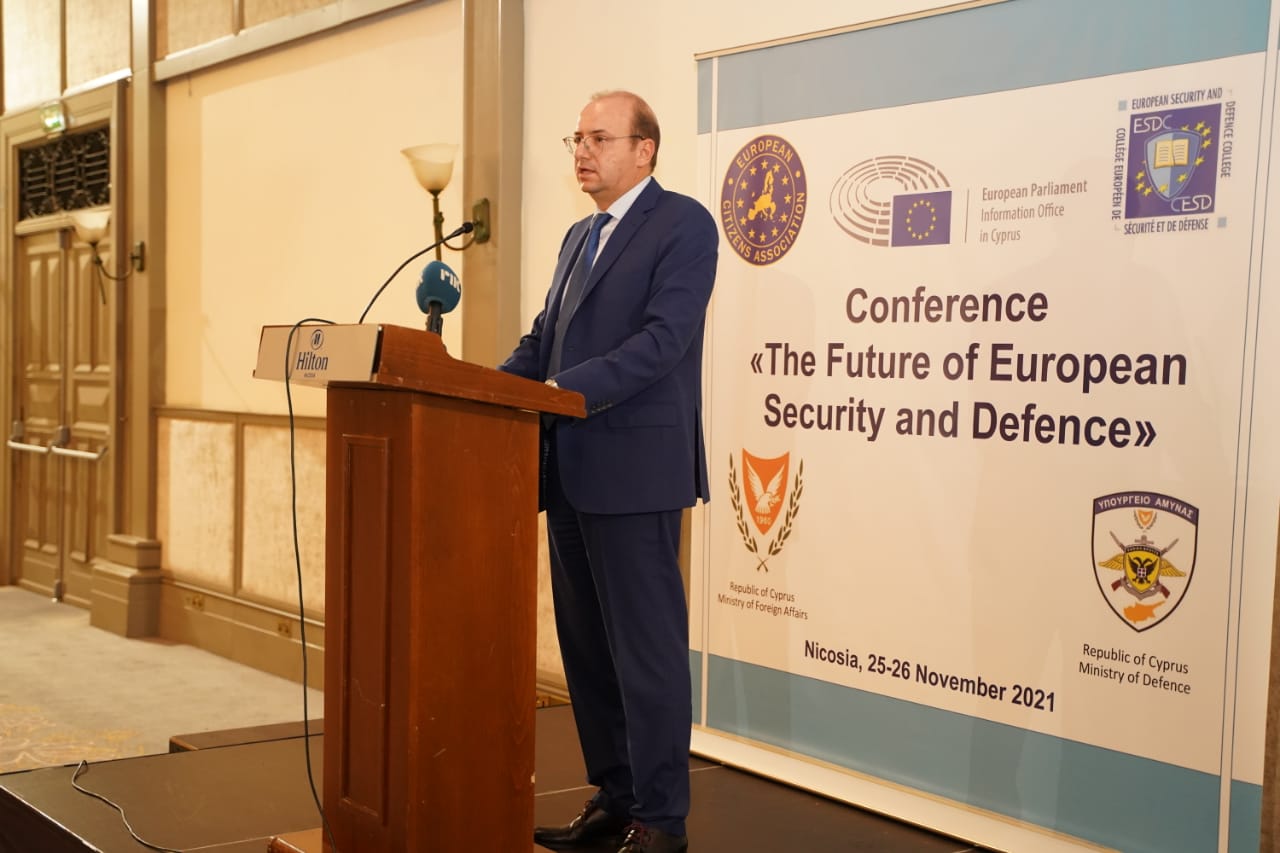 It is my great honour and pleasure to welcome you to this conference, co-organised by the Ministry of Foreign affairs, the Ministry of Defence, the Cyprus Office of the European Parliament, the European Security and Defence College and the European Citizens Association. As you know, “The Future of European Security and Defence” is taking place in the context of the Conference on the Future of Europe. As such, it aims to help ensure that EU citizens are better able to participate in the processes that will define the Union’s future. In particular, the conference aims to give EU citizens the opportunity to actively take part in the debate on Europe’s priorities and challenges, among others, also in the field of Security and Defence.

The accomplishments of the EU over its lifetime are numerous and remarkable. To name only a few, the EU has: developed one of the world’s largest single markets; given roughly ½ billion people the freedom to live, study or work anywhere within the EU; created a single currency, the euro, that is used by the majority of its members states; upholds the highest standards of human rights; guaranteed minimum workers' and consumer rights and protections; established what are regarded as the highest environmental protections in the world. Although the EU is undoubtedly successful in so many domains, it now finds itself at a crossroad. It is confronted by multiple challenges that threaten its internal and external security. Such challenges require a more clearly defined strategic course of action. They require an increase in the EU’s capacity to act autonomously so as to strengthen its global role.

We live in unprecedent times. The speed of events on the international stage and the enormity of the challenges are sometimes difficult to grasp. In addition to the dramatic consequences of the global pandemic, we have witnessed instability and demographic challenges in our neighborhood in recent years. These challenges have been amplified by the threat-multiplier effect of climate change. Furthermore, hybrid threats are growing both in frequency and impact, creating conflictual interdependencies within the internal and external security nexus of the EU and its member states, while soft power is increasingly being weaponised.

Not only is Europe affected by security challenges near its borders, but geopolitical shifts are forcing the EU to question and reassess long-standing partnerships. This more hostile security environment requires that the EU increases its capacity and willingness to act. More decisive action is needed to enable the EU to defend its values and interests and strengthen its resilience so as to anticipate, prevent, and respond to present and future threats and challenges. The EU cannot afford to be a spectator in a world of increasing global political competition. It cannot allow its future to be constrained or shaped by others.

With the advent of its Global Strategy in 2016, the European Union made clear its ambition to be an autonomous strategic actor with global influence. Setting out its strategic objectives in response to the challenges it faces, the EU and its member states have invested in a range of policy mechanisms designed to bring governments closer together on defence, develop its defence capabilities and strengthen its defence technological and industrial base. The Permanent Structured Cooperation (PESCO) was launched to stimulate more multinational capability projects. Equally, the European Defence Fund (EDF) was set up to promote cross-border cooperation in innovation and military research and development. In close cooperation with the European External Action Service (EEAS) and the European Commission, the European Defence Agency (EDA) has been unfolding a Capability Development Plan (CDP) to address long-term security and defence challenges. The EDA has also issued a Coordinated Annual Review on Defence (CARD), that provides a more detailed, realistic and constructive overview of the quantity and, more importantly, the quality of European defence forces and their armaments equipment.

By further enhancing the operational dimension of its Common Security and Defence Policy, the EU is now able to use civilian, police and military instruments to cover the full spectrum of crisis prevention, crisis management and post-crisis rehabilitation. Currently, around 5,000 EU military and civilian staff are deployed in Common Security and Defence Policy (CSDP) missions and operations across three continents. These missions and operations are working for a more stable world and contributing to a safer Europe.

However, all these defence initiatives are still being tested. Their implementation has not yet led to any tangible shift in the Union’s collective defence capabilities or the Union’s readiness and willingness for military deployment. It is widely acknowledged that EU member states are sometimes divided when it comes to strategic interests and decisions. We have also keenly understood that a lack of unity and willingness to act, a delayed reaction to crises and poor coordination carry with them a heavy cost. In spite of our weaknesses, we have to be both positive and realistic. And we can rightfully be so, when we assess the historical evolution of EU security and defence and observe the enormous activity and progress achieved in this domain since 2016. With this in mind, we can see and appreciate European defence initiatives in the correct perspective and place trust in them for the future. We are right to have high expectations for EU security and defence and we are certain that the EU and its member states will commit to the process and succeed in delivering.

The Strategic Compass is aiming to cement the foundations and the Member States’ shared vision for EU’s security and defence. In this regard, we are currently preparing the next decisive step. This process is founded on a comprehensive mapping of the threat landscape across the EU, including intelligence-based analysis for the coming years. Strategic dialogues among Member States are still ongoing and the process is expected to be completed during the French EU presidency in the first half of 2022. With the Strategic Compass, the EU will further develop and strengthen its role in the world. It will do so by operationalizing its strategic autonomy, refining its level of ambition, and building better and more effective connections between its strategic, operational and capability needs. Without doubt, the first draft of this political document is affirming the EU’s willingness to act proactively in order to protect its interests, secure and protect its citizens, invest in defence innovations and capabilities, and strengthen its partnerships with global impact.

In this world of increasing uncertainty, complexity and change, the EU is choosing to pursue a more strategic course of action, increase its capacity to act autonomously to safeguard its interests, uphold its values and way of life, and help shape the global future. To better defend our interests and values and shape a better global environment for future generations, the EU needs to be more assertive and effective. This means that we need to be more united in the stances we take, and more determined and effective in exerting and using our influence. There is no doubt that every European citizen has a say on this. I am personally looking forward to their invaluable and constructive participation in tomorrow’s conference.