Speech of the Minister of Defence Mr. Charalambos Petrides on the occasion of the opening ceremony for the Regional Strategic Leadership Programme 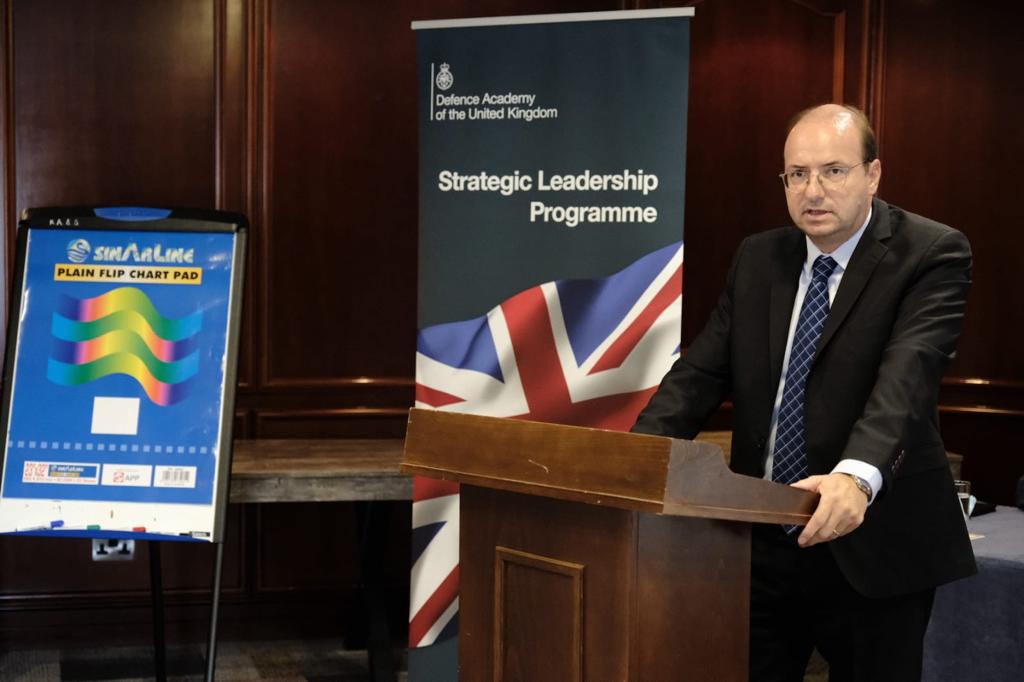 It is a great pleasure to be here today for the opening ceremony of the 4th Regional Strategic Leadership Programme. At the outset, I would like to thank the Defence Academy of the United Kingdom and Cranfield University for delivering the Programme as well as the British High Commission and its Defence Attaché for the hard work in organizing this event.

This Course constitutes just one of the various activities which are included into the Bilateral Defence Cooperation Programme between the Republic of Cyprus and the United Kingdom. Undoubtedly, our two countries have achieved significant progress the last years, in enhancing our bilateral cooperation in the fields of defence and security.

Our region has been at the heart of significant conflicts and geostrategic developments due to its central strategic location at the crossroads of three continents and of major civilizations and religions. The current instability in Syria, Libya and recent events in Afghanistan, the political and economic situation in Lebanon, the refugee crisis, terrorism and the volatile situation in the Middle East, remain major security challenges. The discovery of vast quantities of natural gas and oil in the Eastern Mediterranean, added to the geopolitical and geo-economic importance of the region. The illegal and provocative seismic surveys and drilling activities by Turkey in the Exclusive Economic Zone of the Republic of Cyprus, Turkey’s illegal activities in the Continental Shelf of Greece, which are violating their sovereign rights, do not comply with the international and European law but also the Law of the Sea and constitute an immediate risk to the stability of the entire region with unknown consequences. Furthermore, the decision of the occupier Turkey, to proceed with the creation of new fait accompli, announcing on the 23rd of July further illegal actions regarding the reopening of part of the fenced of area of Varosha, constitutes a flagrant violation of the international law and UN Security Council resolutions and contravenes the latest European Council conclusions. At the same framework and further to the reopening of Varosha area, just a couple of days ago, the occupying regime gave for use to the Turkish army, an area of 145 thousand square meters located in Karpasia peninsula, within the boundaries of the community of Rizokarpaso. These illegal actions, do not coincide with the UN Secretary – Generals’ efforts for the resumption of negotiations to reach a comprehensive settlement.

As can be understood from the aforementioned description, the Eastern Mediterranean is of cardinal importance for regional security with wider significance for the global security system. The situation demands concerted action. Cyprus has maintained long - standing historical ties of friendship, cooperation, and mutual understanding with all neighbouring countries, with the exception of Turkey for well – known reasons. We have promoted bilateral, trilateral and quadrilateral cooperation mechanisms with key players in the region, partners within EU and with other friendly countries respectively. The common denominator for the countries that participate in these cooperation mechanisms is the understanding that these arrangements serve as a model of regional dialogue, contributing to the consolidation of peace, stability and prosperity but also as a tool for achieving greater understanding and cooperation. The Eastern Mediterranean region can be transformed into a zone of stability, growth and prosperity, if all parties acknowledge that our common interest is to work together, in order to create conditions fostering maritime and energy security. In this framework, we consider the United Kingdom a key partner in this effort to address common threats and security, and we believe that has an important role to undertake, as a country with a longstanding tradition and influence on the international scene, but also as a permanent member of the United Nations Security Council.

It is very important that the participants in this Course  are not only from our National Guard, but there is broader representation from the security sector and also regional partners. I see a wide array of participants including, inter alia, from other Ministries, the Police force, Cyprus Customs, the Cyprus Academy of Public Administration, members of the academia, from Greece, Egypt, Israel, Jordan and the United Kingdom. As I mentioned before, the situation demands concerted action. In this complex and multi-agency environment, the way to work together should be found, at the strategic level. Inevitably when circumstances require it, the leaders from different sectors should take logical and immediate decisions, taking into consideration many factors and actors. And leading at the strategic level requires different leadership styles, approaches and ways. It requires inspired and decisive leadership.

I am convinced that, the aim of the course which is to “enhance strategic leadership and management at the strategic level across defence and the wider security sector”, will certainly be achieved. I wish you all, every success in your future endeavours.

Thank you very much.